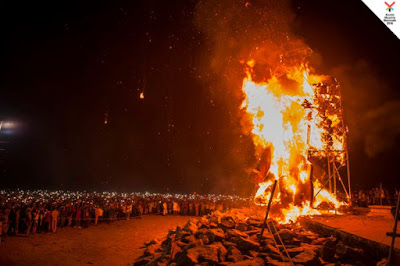 This is night, dark and wild
Stars hugging and panting in the sky,
Birds chirp and sing blissfully of their
ancestors...
Man finds peace everywhere
The peace that limits in conference rooms,
The peace that uses missile crackers to enchant kids,
The peace that suffocates women
in the balloons of pseudo manliness,
And there stands a witness, still and cold
Like a statue
Who he is, asked the stars,
"I am man," howled an animal.
Posted by Unknown at 07:44 No comments:

“So, I am going to be more responsible. From today my name would be tailed with that of my better halfJ”
Her status update greeted me  on Facebook. Yes, that was the day she had been waiting for years. I was sitting in the balcony of my room at the Lavender Palace Kochi, a seashore resort with five-star hospitality. I looked at the ocean that roared with anger hidden in its waves. I was disturbed. The gigantic bed and Italian cuisine seemed uninteresting. No luxuries in the world can make you happy when you are “really” down.
“Why didn’t you tell her your feelings? She would have loved you Samir” My heart interrogated me. The fear of losing a friend stopped me from telling my feelings for her.  However, my heart didn’t listen. It kept questioning me. It enhanced the intensity of my depression…I closed my eyes to escape from the harsh reality and journeyed back to the past…


“Some things in life are better when kept as secrets” I consoled my heart…
Posted by Unknown at 06:14 No comments:

‘This journey was there… in my every heartbeat, the journey for which I was born…
And most importantly the one that defined my life…’

I was lying on her lap at that starry night, counting the stars scattered across the sky like a vast ocean as she smiled like an angel, giving me an impression that the millions of glittering souls reflected on her face and I couldn’t stop looking at her.
‘What are you looking at?’
‘You…only you.’
‘Do I look beautiful?’ she asked caressing my hair.
‘Always.’
‘Shall I ask you something?’
‘Yes, go on.’
‘Why did we meet?’
‘Destiny or maybe god’s mischief.’ A raindrop grounded on my face when I said it. She wiped it with her shawl and planted a kiss on my forehead.
‘You’re right, it’s god’s mischief,’ she smiled. We climbed up the hill to see the misty trees rich with violet apples, a special fruit Bel Seilo was famous for.  Soaked in rain, she prayed to god, ‘More rain!’ The night didn’t lose its charm even though it was raining .The starry sky was shedding tears of bliss. The mist blanketed everything around us as we stared at each other’s’ eyes, glimpsing the vast world of love within us…
I woke up to reality when the bus frequently honked as it reached Bel Seilo. The rain, as I always loved, was pouring down to wet the shrunken earth.  My journey, that started off without a well prepared itinerary was indeed a decision taken by my wildest desires.  This is what you call madness, but I believe a constant wanderer like me couldn’t live without a feeble amount of insanity. To be a traveller all you need is madness. However I had a purpose in this journey. To meet someone. The one I lost long ago.  I came along the snaky roads to reach the misty hills of Bel Seilo, a small village that lied above the Hemanth Peaks.
The bus I was traveling heaved a sigh as it halted near the Prosper Public School or PPS. The scent of wet soil and the freshness of the morning mist shook my senses again after years.  The place was no more familiar to me as the school was renovated completely, the only scar of reminiscence being the old library building that lied adjacent to the bell tower of St. Xavier’s church.  I fondled the letters we carved on library building and once again read those eternal words.
‘I will follow you across the sky and beneath the ocean...
We will be together…forever!’

I recollected the days at PPS.  The story of two orphans who grew up together.  I was an introvert, who spoke only when needed. Contrary to my nature, she was an extrovert who spoke continuously about almost everything.  The only thing we had in common was our unknown origin. We explored everything in Bel Seilo. Unlike other villages in Hemanth Peaks, Bel Seilo was an enchanting place where nature was at its best. It was our habit to spend our leisure time exploring everything in Bel Seilo.  There was a monastery, inside the woods, about two miles away from our school. During holidays we cycled to the woods to see what all things were carried out in the monastery.  Once we met a nameless monk there and he told us that he was two hundred years old. When asked how it’s possible, he smiled and said, ‘just love your life passionately, and then everything will be eternal.’
When we were cycling back, it was raining and we halted near the Robinson farm, the largest vineyard in Bel Seilo. Robinson, the owner of the vineyard offered us his special wine as we sat together beside river bank, watching the river embracing each rain drop into its depth.
‘What are you thinking?’ I asked her.
‘About the monk, how could one be eternal by simply loving one’s life?’
‘I don’t know. It has nothing to do with us anyway.’
She fell into silence. She sat there, staring deep into the river, pondering over the magic of the monk.  Her hair was soaked in rain, but she remained oblivious and still like a lifeless statue.  The rain never stopped as it bought prosperity to the land. We were lovers of rain and we didn’t allow a drop to touch the earth without caressing us. After savouring the rain for an entire day we retired for dinner at Christopher uncle’s house. Father Christopher was the vicar of the St. Xavier’s church and we shared a close intimacy with him.  We told him about the 200 year old monk in the monastery.
‘Children, someone has bluffed you. I have been living here for years and never heard of such a person before,’ Christopher uncle chuckled. We regularly visited the monastery inside the woods to see the 200 year old monk again, but we couldn’t find him.
‘Uncle is right. He might have bluffed us,’ she finally said in a gloomy voice. But she became happy when drops of monsoon fell on her forehead, wiping out all her worries.
Years passed without hesitation and came our final year at PPS. The transience of life is its most fascinating feature; it makes people live each day with great enthusiasm. And we were two enthusiastic souls flying everywhere in Bel Seilo. We would walk to woods every day after school hours and would lounge on river bank sharing our dreams.
‘What would you do after school?’ she asked me one day.
‘I don’t know. Future is uncertain.’
‘Aha! Why do you think like that?’
‘I don’t want to leave Bel Seilo.’
‘You don’t have to confine your life to Bel Seilo.’
‘You want me to leave?’ she remained silent.
‘You will come back, won’t you?’
‘What if I won’t?’
She didn’t speak. Instead she insisted to go back. We walked in the rain holding our hands.
‘I am sure that you will come back,’ she said, ‘Like this rain you will be here to prosper my life.’ She smiled out of bliss as I took her in my arms. ‘I love you,’ I said as my voice excelled the pitter-patter sound of the rain.  Our love manifested in the lap of nature, amidst the thick greenery of Bel Seilo as we kissed.
She carved something on the library building in that rainy evening.
‘I will follow you across the sky and beneath the ocean...
We will be together…forever!’

I left Bel Seilo immediately after school to make a good fortune and she remained there with some charity works headed by Father Christopher. The world opened its wide horizons to me and I was fascinated by the fast-paced life of people. Gradually Bel Seilo had become a faintest dream in my life. I started to forget things, my life seemed to achieve a different pace as I travelled round the world and came across many people. I had had many sleepless nights when I saw a girl’s picture in the nightmares. The conviction that I had made a big mistake even elevated me to the status of a great sinner. I was thrown into the storm of reality all alone. And I ran behind comforts like an animal, bedding numerous forms of seducing creatures every night to share the desperation of solitude. Bel Seilo was overlooked by heights of skyscrapers.  Years later a sudden urge to visit Bel Seilo shook me. So I decided to go back to find my gem.
‘Who are you?’ A little voice asked me, shattering my past recollections. It was a girl aged about five.
‘Alex …,’ she seemed happy when she heard my name.
‘Alex uncle…! Are you Aani’s friend?’ she asked in an exciting voice.
‘Yes!’ I was on cloud nine.
She led me to a well-built small house near the church. In its poorly lit room I saw Father Christopher reciting the Bible before the garlanded picture of a beautiful woman.
‘Uncle…!’ I called him. He turned around. He had lost the old charm and his eyes were grief-stricken.
‘Alex!’ he exclaimed ‘Where have you been son?’ I stumbled for words as he embraced me tightly.
‘Uncle, what happened to Aani?’ My voice trembled.
‘She is no more. It was a sudden cardiac arrest.’ Christopher wiped his tears as I collapsed on the floor.
‘Aani waited for you all these years. She wasn’t married. She had a conviction that her only match was you,’ Christopher said when I became stable.
‘Who’s that little girl?’
‘It’s Sera, an orphan. Aani adopted her when she was an infant,’ I looked at Sera. The innocence in her smile, the mischievous eyes and dimpled cheeks were as same as that of her stepmother. She was watching me from a distance, hiding behind the curtain. I gave her a bunch of fragrant roses which I had bought for Aani. ‘Thank you uncle,’ she smiled at me hesitantly.
‘You know something?’ I said stroking her dark brown hair, ‘I am your dad.’
‘Uncle, how could you be my dad?’ she was confused.
‘Because I know magic!’ I replied instantly, ‘Come with me let’s go somewhere.’
I walked with her along the leafy path to the woods. The luxuriant aura of nature was adorned with rain drops as clouds were shedding tears of ecstasy. I remembered the word of that monk when I saw Sera’s smile. Life is ageless, only our thoughts are mortal. I watched her dancing in the rain, her tiny form moving in synch with the rhythm of rain…
‘I love my life…’ I whispered. I couldn’t save Aani, but fate had given an alternative way for salvation. It was Sera.

‘I will follow you across the sky and beneath the ocean…
We will be together…forever!’ Sera sang blissfully as I watched her in silence. Birds stopped chirping, trees listened attentively, the wind ceased to blow and the nightingale was amazed.
‘More rain…!’ I prayed like a pluviophile.